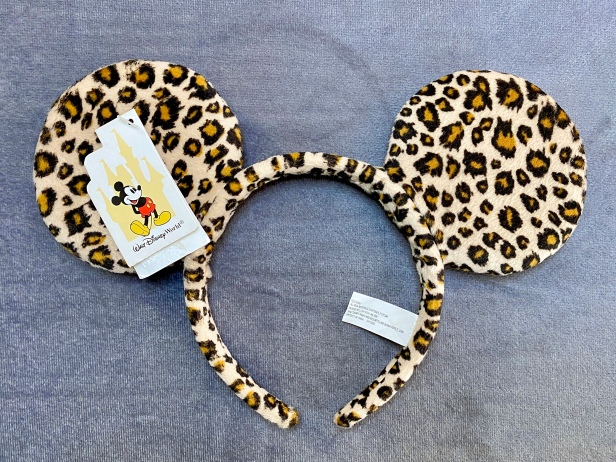 The first Leopard Ears were released sometime around 2006. The first pair featured a lighter Leopard print and different versions of the older style of sewn fabric tag. Though the official release date is unknown, the original fabric sewn tag that they came with dates back to 2006 or before (the red/black/ yellow circle logo likely between 2003 – 2006). They also came with the horizontally sewn tag and the vertically sewn tag. For more information about the tags, see this post.

I am loving the EARidescent look and different colors used. It’s amazing how shimmery it really looks!
The new popcorn collection makes me so happy! I can’t wait for the cooler weather so I can wear this Spirit Jersey!
I cannot believe how fast Halloween is coming and I’m starting to have a panic attack! We have not even started putting out our Halloween lights display. On a side note… I absolutely ADORE this Mickey pumpkin @loungefly! Getting to use it in the parks makes it totally worth being behind schedule decorating. 😂 Do you do outside Halloween decorations? I didn’t even know that existed until I moved to FL (from northern IN)?
As Halloween quickly approaches, I figured it would an appropriate time to start sharing my Halloween Ears for #mouseearmonday. Today’s feature is my Tokyo and Paris collection! While this might be the smallest part of my Halloween collection, it also features some of my rarest ears. Do you have any favorite Halloween Ears?
Sometimes you get the monorail pic and and sometimes you wait forever and… nothing. What do you think of the new Spaceship Earth lights and monorail “glow up?” I personally love it so much and can’t walk to get more pictures!
Caribbean Beach Resort just released their own pair of Loungefly Ears! What do you think of them? What Resort do you think should release Ears next?
Loading Comments...
%d bloggers like this: