**Because of the wide variation of tags used on Disney Parks ears, this post will be ongoing and modified as new tags are created and other tags are found. Hopefully this will be a resource that proves useful when identifying ears.**

Official Disney Parks ears come with two different identifying tags, the hang tag and the fabric tag (I call the fabric tag the tush tag from my days of collecting Beanie Babies). These two tags are helpful when attempting to identify the ear’s age, park, and authenticity, but with ears spanning over twenty years and six parks, this can be a somewhat difficult task. In order to judge authenticity, it is important to examine the fabric tag, the price tag, and the style and attachment of the tags (particularly the fabric tag).

Before looking at the actual real tags, let’s start with the known fakes. There are a few fabric “tush tags” floating around that are obvious fakes. One such tag is attached sideways (new style) and appears to say Disney in an oval logo. In reality, this tag says “Disnfy” with the i being dotted with an @. Another tag is unfortunately less obvious at first glance. This tag is attached sideways (new style) and under Disney Parks it says “authemtic.” Yes, you read that right. Authemtic with an “m.” The newest “fake tags” now are sideways sewn and say “Disney Store” on parks exclusive ears.

For comparison, here is the inside of the tag on the real version of the same ears.

You will notice that things look very similar, but the real tag has an FAC number and is made of a less shiny fabric. These are two things that you can go by, however, keep in mind that there are always exceptions. Older ears do not have FAC numbers on the tags and the FAC number can vary from park to park (if the same pair was available in the US and Hong Kong for example). Some official fabric tags are also made of a shiny material. If only it could be that simple!

After identifying the fabric tag itself, the next step is matching the logo type and the style (horizontal or vertical attachment) to the ears. Like before, it’s not always that simple, though. Several ears featured different versions of fabric tags over the years so it is possible to find one pair with several different types of tags. Seasonal or limited ears will generally always feature only one type of fabric tag. (Most of the non-stock picture ears on the site feature the tag so you can check for attachment style. Unfortunately, I flipped the tags in for appearances so that is not usually visible. Feel free to comment or email your questions to me here, on Facebook, or on my Instagram).

First up, US Disney Parks fabric tags. This does not include every type of tag or variation, but a good sampling of what does exist. Also keep in mind that many pairs of US ears were made with multiple styles of tags/types of attachments as they were around for so many years.

One of the older styles of tags. These were used on some ears until around 2006. 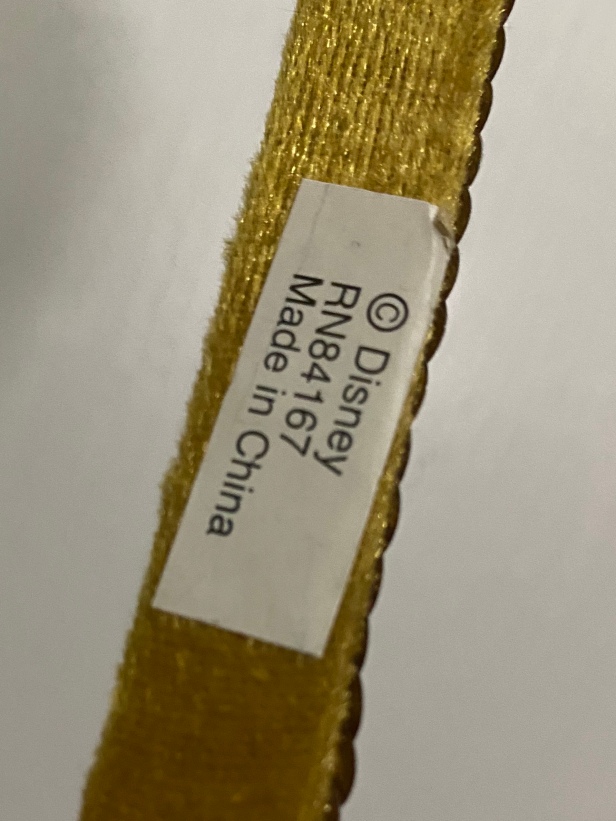 The sticker tags were used on sequin ears until the new style came out in 2012. 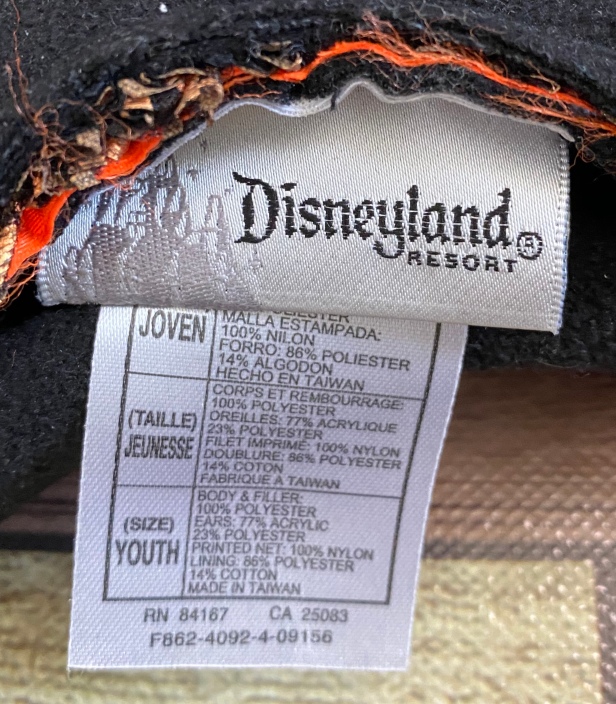 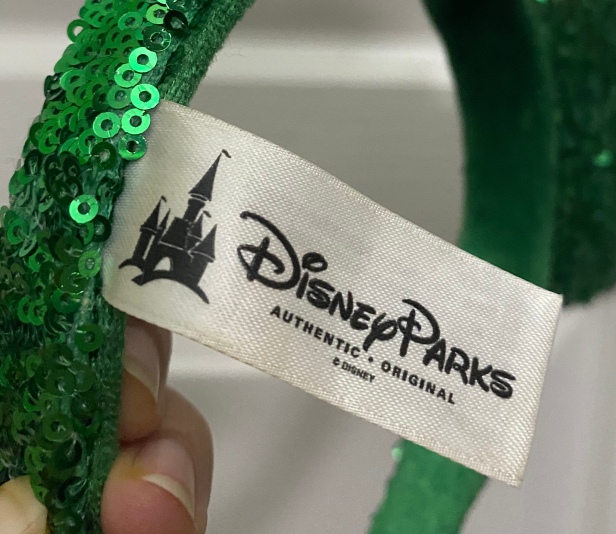 Some ears feature the horizontal fabric tag on the left side and some are on the right side.

The circle logo tag featuring “Disney” instead of “Disney Parks” was first used in early 2021.

Second up is Tokyo Disneyland ears. The Tokyo Ears feature a small fabric tag in either pink or blue. Blue was an older color used and is now the current fabric tag color again. The tags can be a single or double tag and can also feature “Made in China” or “Made in Vietnam.” Older Tokyo Ears may feature a slightly wider version of these tags. Tokyo Disney rarely has ears that are the same as the US and will never have the US style of tags as they are not owned by Disney. 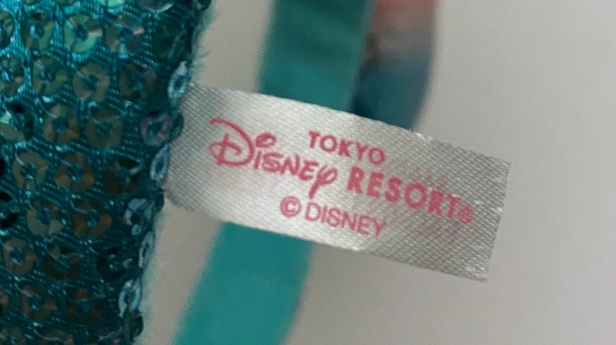 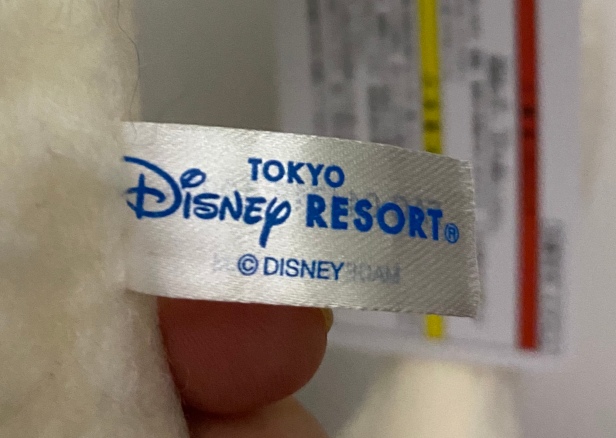 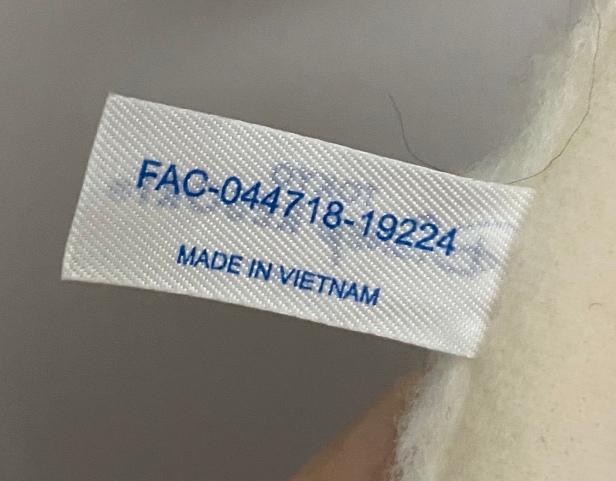 Next, I present Hong Kong Disneyland ears. The tags used for Hong Kong exclusive ears can tend to be more gray and vary greatly in size, style, and attachment. The tags used on the ears varied greatly November 2019 to January 2020 (for example). This is not HK tags in entirety, but a sampling. Hong Kong ears can also have the regular Disney Parks tags that the US ears have. 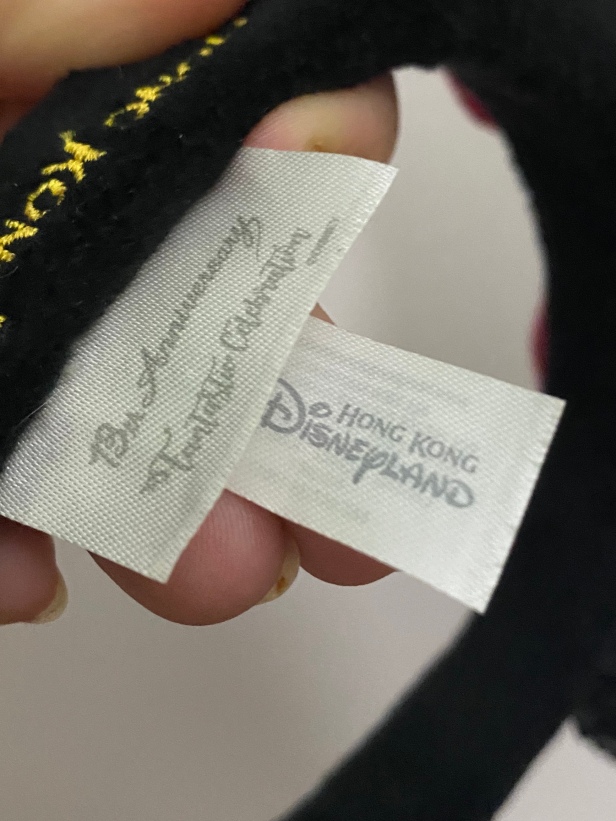 Now for Shanghai Disneyland. Since they are the newest park, they have the fewest types of tags attached. These fabric tags match the tags used in the United States.

Lastly, I present Disneyland Paris ears. Like the Hong Kong ears, this is just a sampling of the different tags. Also like the Hong Kong ears, they feature several styles and types of attachments. The tags can be attached on the side, on the back of the ears, or under the headband itself. One other interesting thing to notice is that that the ears generally say “Euro Disney” in some form on the back of the fabric tag. 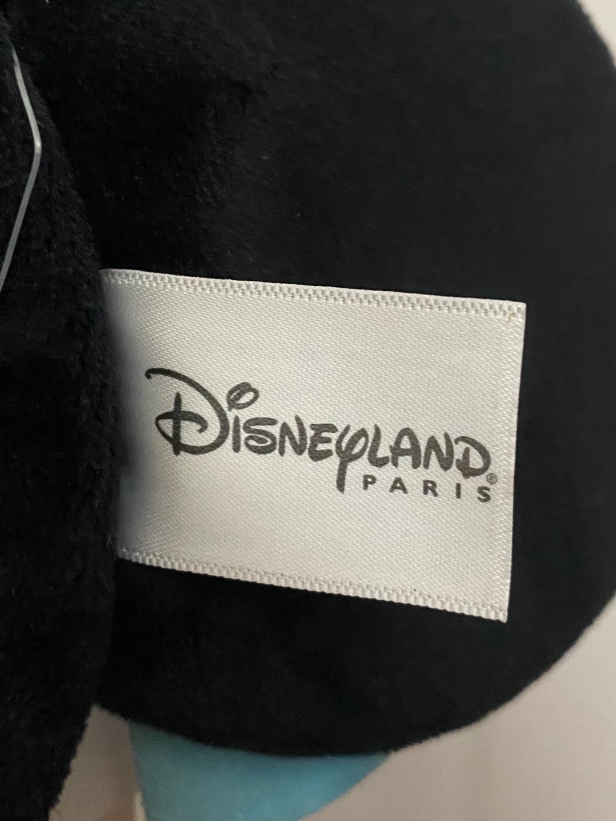 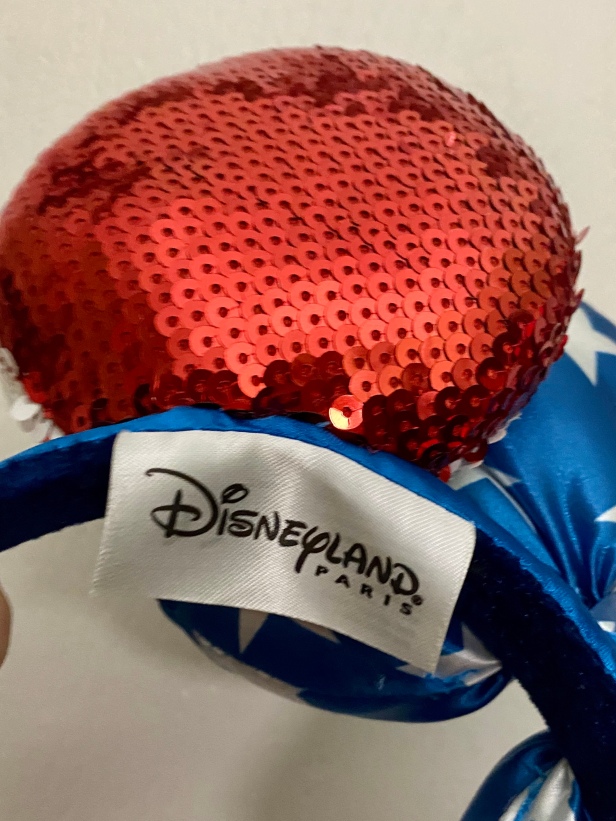 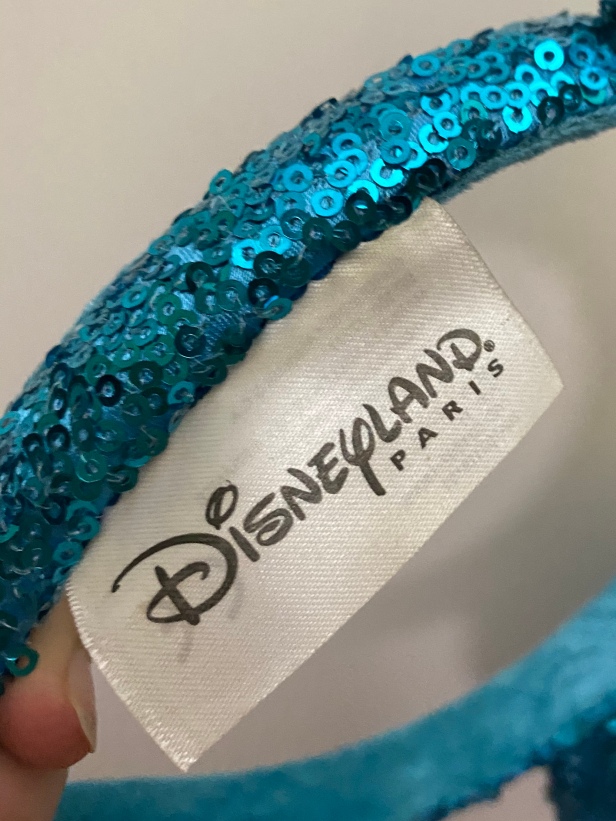 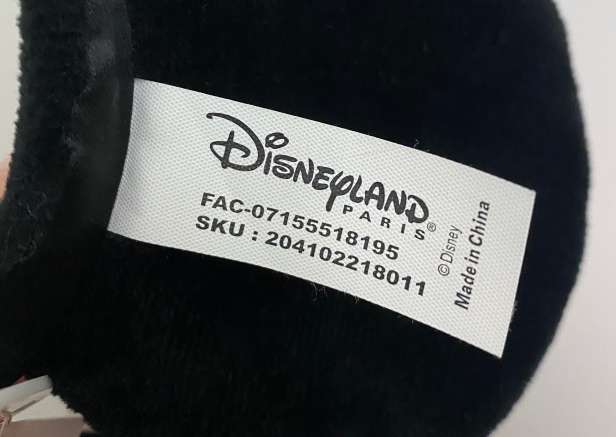 There are a few other different tags to be aware of as well from the Disney Cruise Line, Aulani, and the Disney Designer Ears Collection.

Ears sold on shopDisney may have a long tag (pictured below), but that is not always the case as they sometimes sell parks ears. Sometimes parks ears will also have the long tag, but it is not very common.

**Minnie Mouse: The Main Attraction ears will ALWAYS have the long tag. Any ears with the side sewn tag were NOT sold by Disney in ANY park.**

Another thing to pay attention to is how high or low the fabric tag is placed on the headband. This can be helpful if the hang tag is missing, but not 100% identifiable as the fabric tag location can sometimes be an error which causes the ears to be sold cheaper at the outlets or at Cast Connection (the cast members only store).

The paper hang tags are a different story as they can all be very different, however, there are a couple identifying matters that can be examined. First, a lot of pairs are now being photographed as having a Shanghai Disneyland tag. Exclusive ears from Aulani, Hong Kong, the US, and especially Tokyo will NOT have a Shanghai tag. If they do have a Shanghai tag, it should look something like this:

You will notice these ears feature a holographic sticker with a price of ¥179 and say Disney on the back (not Winnie the Pooh).

Here is the FAKE Shanghai tag that is becoming commonly found on resale sites.

Notice the price is listed less at ¥129 and there is no holographic sticker on the tag. Also notice that fake tag says “Based on the “Winnie the Pooh” Works… where the real tag says Disney only and the perforation marking is just printed on.

Official Disney Parks ears will also NOT have a blue Sega Fun Fan Amuse tag (see Fun Fan Amuse ears for more details). Any of the ears with these tags above may possibly be authentic (as in factory seconds or sold out the back door), but the quality may be less or they may have significant issues. It could be possible for a real pair manufactured as mentioned above to have a fake Shanghai tag attached, but there have been significant flaws in some ears with those tags so it is always a gamble. 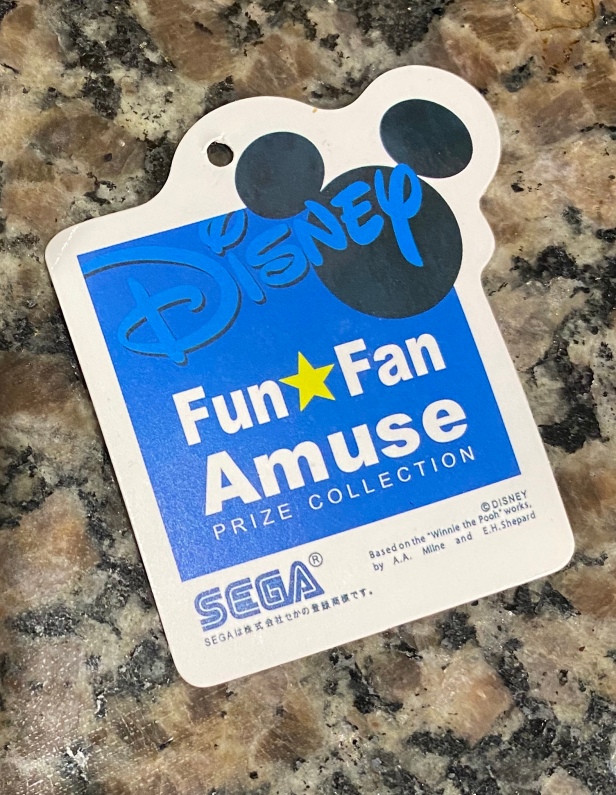 Lastly, keep in mind that hang tags are not usually attached to the fabric tag. Usually they will be wrapped around the headband (by the bow) as they are used to hang the ears up and attach the barcode/price tag. Recently I have discovered some ears (mostly older) that were sold in parks and have the price tag through the fabric tag (see below). The best way to determine authenticity is to look at the actual tags. If they are older and from the US parks, it is likely that they are authentic. I have only seen “fakes” with the horizontal and vertically sewn style of tags and NOT the older. The tags can be attached through the ear itself, though. It is especially common to see this on older ears, overseas ears, and recently.

As you can see, it has been common for almost twenty years for tags to possibly be punctured through the ears so this is a poor judgement of authenticity. In fact, the only fake ears that I have seen with the tag punctured through the ear were Fun Fan Amuse Ears and those are easily identifiable based on the tag. It is more common for fake ears to have a tag attached around the headband or on the fabric tag.

Notice this pair of Gingerbread Ears. They have a parks tag with the hanger, but the tag is flipped over in every picture. Also notice the fabric tag. This pair of ears was not sold in parks with this version of fabric tag (it should have the circle logo). You can also see the puncture hole in the fabric tag where a different tag was once attached. While these may have been error ears and factory seconds, they were not sold in parks like this.

These details will help in identifying the authenticity, age, and location of official Disney Parks ears. As ears continue to grow in popularity, though, the way fake ears are manufactured and advertised will change. If the ears make you happy, then that is what matters most of all.

How cute is the new Disney Eras Collection for the start of the Disney100 Celebration?! What pieces are you buying? (Affiliate links and pictures of all the merch in my story)
Check out these new Moana Ears coming soon to Disney Parks and shopDisney!
The 50th Finale Ears have finally arrived at Walt Disney World! These were at EPCOT, but I know they were also at MK, WoD, and DAK today. Was this pair a buy or pass?
🚨New Ears!🚨
🚨More New Ears! 🚨
Have you seen the new ear releases from the US (top) and Shanghai (bottom) yet?